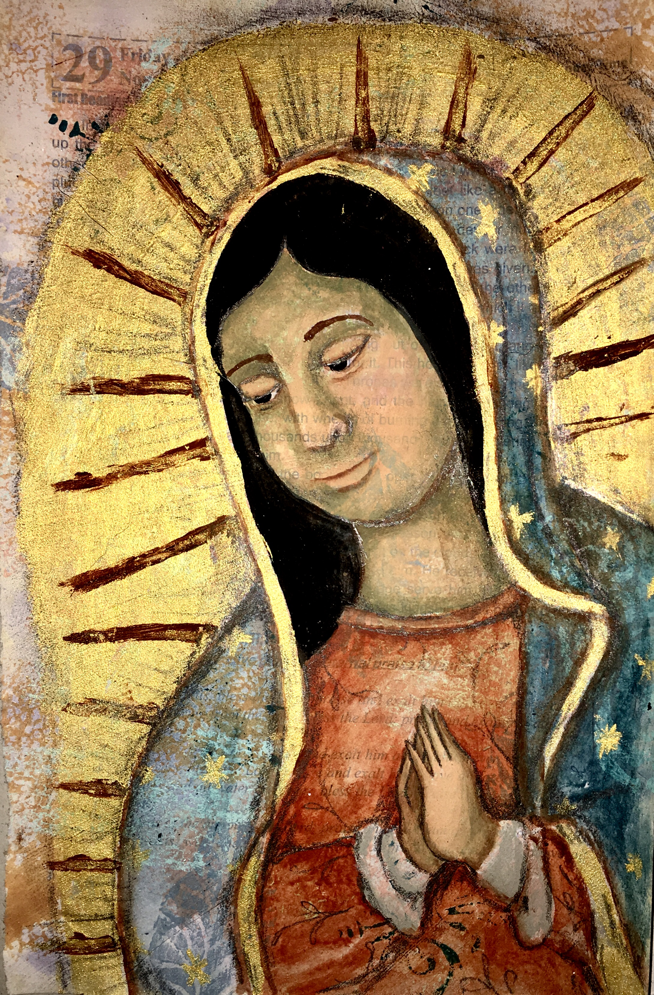 Today is the feast day of Our Lady of Guadalupe, or in the original Spanish, Nuestra Señora de Guadalupe.

In the 1400s, Mexico was under Aztec oppression. In every town, there was a temple pyramid, where Aztec priests would offer human sacrifices to their god Huitzilopochtli. This god was the "Lover of Hearts and Drinker of Blood," and the priests would cut out the beating hearts of victims, usually adult men but very often children. Over 50,000 human beings were sacrificed each year. Then in 1523, Franciscan missionaries came and evangelized the Indian people.

On December 9, 1531, Mary, the mother of Jesus, appeared to a 57-year old simple peasant man, an Aztec convert, who was on his way to mass. Mary asked Juan Diego to request Bishop Zumarraga that a shrine be built in her honor on the site where she appeared. When Juan presented this request to the Bishop, the Bishop naturally asked for a sign. After several encounters with Mary, Juan brought the Bishop what he asked for. When Juan opened his tilma, his peasant cloak, beautiful Castillan roses, foreign to Mexico, fell out, but more than that, the Bishop saw an extraordinary image of Our Lady on the tilma. The Bishop wept at the sight. That tilma still survives today and thousands go to see it in the Basilica of Our Lady of Guadalupe.

We may be skeptical about apparitions and images appearing on tilmas. However, because Mary spoke to Juan Diego in his native language, and because she was wearing an Aztec dress in the image, this provoked millions of conversions to the Catholic faith in just under seven years.

Today, we may not have human sacrifices to gods, but 27 million  women and children are being sacrificed at the altar of sexual trafficking. One woman’s story is particularly poignant. She gave money to some people who were going to help her get to another country where she would study nursing. Instead, she was forced to have sex with about 40 men a day. When she got pregnant and gave birth, they took her baby and sold the baby to pedophiles. Irene couldn’t take it anymore and leapt from the 4th floor of the apartment where she was held hostage. She was found, brought to A21, a foundation that fights sexual trafficking, and today, she is pursuing her dream of becoming a nurse.

There is too much evil in the world. But the vision in the Book of Revelation chapter 11 gives us hope. Because of Mary’s yes, because she gave birth to Jesus, and because Jesus gave His life for us on the cross, “Now have salvation and power come, and the Kingdom of God and the authority of His anointed.”

Posted by HeARTworks at 7:17 AM