Angels Watching over Me 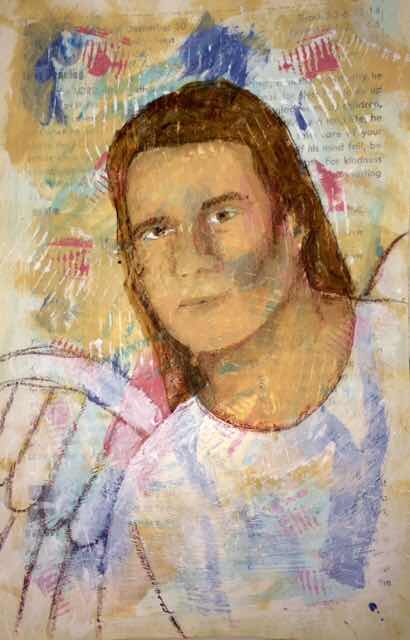 John the Baptist was born amidst amazing circumstances. His parents Zechariah and Elizabeth were very old, and they had no children because Elizabeth was barren.  One day, Zechariah, a Jewish priest was on duty inside the sanctuary in the Temple, burning incense.  An angel appeared, and Zechariah was overwhelmed with fear. Who wouldn't be? But the angel told him not to be afraid. "God has heard your prayer, and your wife, Elizabeth will bear you a son!"  Angel Gabriel then proceeded to list the awesome qualities of his son, and instructed him to name him John. "He will be great in the sight of God."

"How can this be?" Zechariah asked incredulously, "We are both so old!"  True enough, Elizabeth became pregnant, and she gave birth to a baby boy. Everyone was so amazed and the news of what happened spread throughout the Judean hills.

When we were born, God knew us too. No angel came to announce our arrival, but He formed us just as "fearfully and wonderfully" as He formed John the Baptist. We too have a purpose in our life.  We were not just dumped on earth without rhyme or reason.  When we were born, I do believe all the angels and saints rejoiced in heaven.  If an angel came to deliver the news, the angel would have listed our awesome qualities too!

I believe that there are many things happening in the spiritual realm more real than what we see with our eyes. That is why we should not despair, and only trust and believe in what God is doing on our behalf. Yesterday my sister prodded her husband to share what happened when he was praying for me during my open heart surgery. He was very reluctant, saying repeatedly, “I’m not an angel person.” Then he said when he was praying for me, he saw several large angels surrounding me during my operation. “Then I cried,” he said, embarrassed, “and I’m not a crying person either!” After that, he knew I was going to be all right.

I cried too when I told me. Imagine, God sending angels to watch over me! We don’t really know but what if that was the ordinary run of events? If we pray that God will send His angels to watch over our children, our spouses, our homes and schools, our country, will He not do it? Let us build up our faith during this season of grace and we will see more of God’s work in our life.

Posted by HeARTworks at 6:44 AM