What Do You Want Me to Do for You? 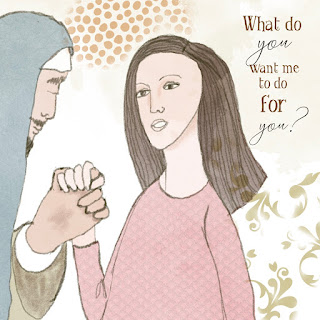 The Gospel reading today in the 18th chapter of Luke is about a blind man named Bartimaeus. He was begging by the road when he heard a crowd pass by. "What's happening?" he asked. When someone told him it was Jesus of Nazareth, he shouted, "Jesus, Son of David, have mercy on me!"

The people in the crowd shushed him, reproved him, rebuked him, and told him sternly to be quiet. Perhaps if it was us, we would have been intimidated and shut up. After all, we would have spent a lifetime living in the shadows, just waiting for someone to help. Perhaps we would have been afraid, unwilling to risk more censure. There were probably many blind and sick people who were shushed by the crowd as Jesus passed. But Bartimaeus is mentioned not only in Luke, but also in Mark where he is named, and Matthew, because he did not give up. In the Amplified Bible, the translation reads that Bartimaeus screamed and shrieked some more, "Jesus, have mercy on me!!!!"

This reminds me of the story of the widow and the corrupt judge in the same chapter of Luke. Because Bartimaeus was persistent, Jesus could not ignore him. Just as Jesus does not ignore our prayers when we come to Him in our need. One very important lesson I learned from this story is that there will be many who will try to stop us from praying. It may be the distractions of the world. It may be ourselves. We stop praying because we don't want to be disappointed. Maybe we stop because we are sulking that God does not answer right away. It may even be brothers and sisters in the church crowd, shushing us because they just don't believe God will make miracles today! Lesson? Pray without ceasing and just don't give up!

Posted by HeARTworks at 2:32 PM